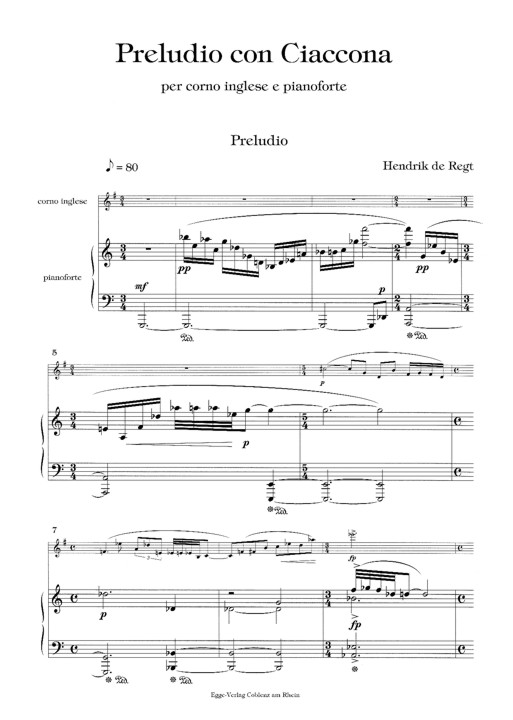 Hendrik de Regt was born July 5, 1950, in Rotterdam, The Netherlands. He studied piano and organ in his native town, and theory and composition with Piet Ketting, a pupil of Willem Pijper.

From the outset, de Regt's compositions have stressed melodic and polyphonic lines within a clear harmonic context. He is drawn to musical tradition and enjoys linking early musical forms with modern ones to create a stylistic synthesis.

De Regt composes a variety of vocal and instrumental music. In addition to the publications of Egge-Verlag, his music is available through Dorn Publications, Wehr's MusicHouse, and PRB Productions (United States); Donemus (The Netherlands); DMP and Lantro Music (Belgium).

The Preludion con Ciaccona is composed under the supervision of Piet Ketting, the composer's teacher for composition. The old version has been revised many years later without changing the contents definitely.

The work is a good example for the linking of early musical forms with a more modern tonality.

In the melodic lines and harmonic progression there is always an audible tension going to a relaxation of the harmony. For this reason the whole composition has the distinguishing mark of tonality by the use of dissonant and consonant, the progress of tension to relaxation in harmony. In view of this fact the composition cannot be denominated as atonal.

The composer prefers an expressive and almost romantic sound in the performance of his elegiac composition.