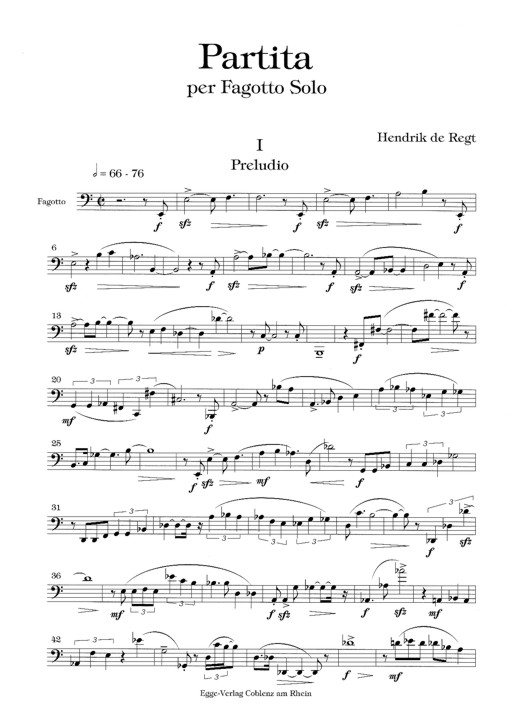 Hendrik de Regt was born July 5, 1950 Rotterdam - The Netherlands – studied piano and organ in his native town and composition with Otto Ketting, from 1968 till 1972 and from his father Piet Ketting during 1975 till 1984. Right from the beginning it was clear that melodic and polyphonic elements were to occupy a predominant position in his compositions.

From the outset, de Regt's compositions have stressed melodic and polyphonic lines, though he has placed them in harmonic context.

He is drawn to the musical tradition and likes to link early musical elements with modern ones to create a stylistic synthesis.

For de Regt's, the most important target of a composition is the satisfaction of the performer and listener derive from hearing the piece.

Composer, performer and listener are always connected with each other like a triad, therefore a composition have to be understandable for the three parts.

De Regt writes and wrote a variety of vocal and instrumental chamber music.

In addition to this Egge-Verlag production, his music is available through Dorn Publications and PRB Productions (U.S.), Donemus-Amsterdam, and DMP - Belgium.

I composed a series of partitas for one solo (wind)instrument, because the literature of solo wind-instruments, also without any form of accompaniment, is rather limited.

With this partita for bassoon solo the bassoon-player is independently, especially in cases when any possibility of accompaniment with other musicians, for instance a pianist, is lacking.

For composers it is a challenge to write for one melody-instrument as an exercise in melodic invention, and he can work up the solo composition into a work for several voices/instruments.

In case of the partita for bassoon (solo) the composer used the melodies of mentioned composition for his partita for four bassoons, also an arrangement from one to four voices.

The practical utility of this composition is threefold, as above explained.

The bassoon-player is not allowed in giving a performance of all the pieces of the partita, he can make a selection of some dances, for that reason I used the musical form "partita".